Now the BLS Is Corrupted – Claims 261,000 New Jobs But Data Shows This Is Fake News

The Deep State has crept into every entity in the US government.  Now we can’t even trust the numbers coming from the Bureau of Labor Statistics (BLS).

This news release presents statistics from two monthly surveys. The household survey measures labor force status, including unemployment, by demographic characteristics. The establishment survey measures nonfarm employment, hours, and earnings by industry. For more information about the concepts and statistical methodology used in these two surveys, see the Technical Note.

But Zerohedge put together another excellent report on the real status of the economy and the errors in the BLS report.

For starters, we have the job layoffs just in the past 24 hours.

Layoffs announced in the last day:

A simplistic, superficial take of today’s jobs report would conclude that the red hot jump in nonfarm payrolls indicates a “strong hiring market” (just ignore the jump in the unemployment rate). Nothing could be further from the truth.

Recall that back in August and September, we showed that a stark divergence had opened between the Household and Establishment surveys that comprise the monthly jobs report, and since March the former has been stagnant while the latter has been rising every single month. In addition to that, full-time jobs were plunging while part-time jobs were soaring.

Fast forward to today when the inconsistencies not only continue to grow, but in some cases have becoming downright grotesque.

Consider the following: the closely followed Establishment survey came in above expectations at 261K, above the 195K expected, and down modestly from last month’s upward revised 319K…

…Alas, there is only so much the Department of Labor can hide under the rug because when looking at the abovementioned gap between the Household and Establishment surveys which we have been pounding the table on since the summer, it just blew out by a whopping 589K, the most since June’s 608K, as a result of the 261K increase in the number of nonfarm payrolls (tracked by the Household survey) offset by a perplexing plunge in the number of people actually employed which tumbled by 328K (tracked by Establishment survey).

What is even more perplexing, is that despite the continued rise in nonfarm payrolls, the Household survey continues to telegraph growing weakness, and as of Oct 31, the gap that opened in March has since grown to a whopping 2.3 million “workers” which may or may not exist anywhere besides the spreadsheet model of some BLS political activist! 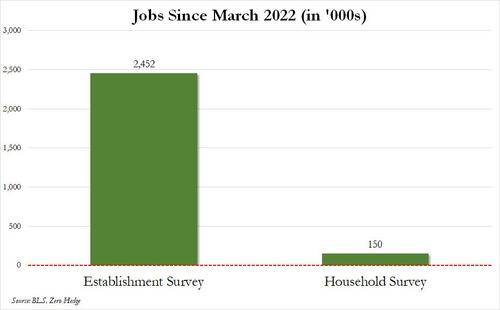 Showing this another way, there were 158.5 million employed workers in March 2022… and 158.6 million in October 2022 an increase of just 150K, during a period in which the number of payrolls (which as a reminder is the number the market follows) reportedly increased by 2.5 million!

See the entire piece at Zerohedge.

Obama and Biden are laughing at us.

The post Now the BLS Is Corrupted – Claims 261,000 New Jobs But Data Shows This Is Fake News appeared first on The Gateway Pundit.